Posted on November 1, 2012 by tropicaltheartist

When we were growing up, this was one of my dad’s favourite words.  Whenever we got stuck on a problem and didn’t know how to solve it, whether that was planning a new barbeque construction ( a veritable Australian shrine, where animals are, shall we say,”ritually sacrificed”), building a piece of furniture or changing the engine oil, he would always say we needed to improvise.  Dad was a drummer, so knew very well how to improvise as a musician, but in this case, he meant “be inventive”.

The dictionary tells us this about the word:

1. To invent, compose, or perform with little or no preparation.

2. To play or sing (music) extemporaneously, especially by inventing variations on a melody or creating new melodies in accordance with a set progression of chords.

3. To make or provide from available materials: improvised a dinner from what I found in the refrigerator.

1. To invent, compose, or perform something extemporaneously.

3. To make do with whatever materials are at hand.

I like to think of improvisation as the act of cooking up a strange brew, from whatever ingredients are available.  It’s purposeful experimentation or invention, with a hard-stop time limit.  You have to get it done right now.  As a model of human activity, it’s one of the more exciting forms, in my opinion.  In art, it’s a tremendously liberating feeling to just go with the flow and improvise to your heart’s content.

Musicians improvise all the time, especially when they’re in a jam session.  You make it up as you go, using the skills and hooks you’ve picked up over a lifetime of playing.  Improvising also encourages you to try new things, because this is all only temporary.  It will be discarded when you’re finished.  You’re in the here and now, living the moment, but afterwards, it will be forgotten.  What better time to stretch your technique and try outlandish new things?

Actors and comedians improvise, when they lose their lines or when they think of a funnier one.  There are “theatre sports” where actors are encouraged to be entirely spontaneous and unscripted.  Improvisation is an art in its own right.

Artists that improvise have the power to delight others that watch.  You can see this in painting demonstrations, glass blowing, sculpture, jazz clubs and a myriad other places.  Street art is often admired because it is so improvisational.  Seeing an artist bring a painting to life before your very eyes in part explains the success of “how to” videos and online demonstrations.

If you think about it, all art is, to some degree, all about making up what you need, on the spot, with what’s available.  The fact that you have some paint, a blank canvas, some brushes and a subject are all just the building blocks of a painting you are going to have to improvise.  There’s very little planning, no script and virtually no rehearsal.  You just dive in and paint.  So much art is made that way.

Once upon a time, in this country, we had a culture of “make, do and mend”.   It was officially encouraged.  People were told that it was their patriotic duty to improvise – to take what they had and make it last, or to make what they needed with what they had.  Now, it seems, we are encouraged by the same authorities to consume and waste.  What happened to improvising?  Did we suddenly find some other new planet to exploit?  Since when did patching something up or making it last a little longer by replacing the worn out piece become anathema to markets?

As a result, we no longer demonstrate our ingenuity in quite the same way.  We don’t know how to jury rig, to go the distance.  We see the little lights on the dashboard and don’t know how to take the simplest of corrective actions to get ourselves safely home.  It’s a lost art.  Whereas we were once adept at making jigs and fixtures out of any old junk we had to hand to get the work done, now we seem utterly reliant on the special tools that only large corporations or specialist consultants seem to posses.  We don’t even collect the good junk anymore, which was the raw material for our improvisations, in former times.  That’s all gone to land fill, so that we might inhabit our too-small homes like so many minimalist, austere architects, bent on presenting an image of clutter-free purity to those that might visit our sterile and lifeless living spaces.

I haven’t seen a decent “lost and miscellaneous fasteners” or “assorted nuts and bolts” jar since I was a child.  Does anybody even collect buttons anymore?  Do we still have rows of re-used coffee jars filled with different sized screws and nails, carefully lined up in our workshops anymore?  Do we even have workshops, those cosy dens of usually masculine creativity and sanctuary?  Aside from their sheer utility, these collections of surplus or discarded bits and pieces were fruitful playthings for young imaginations and the contents often found their way into abstract artistic creations.  Why not?  They were discarded rubbish anyway.  Finding a use for these small items, as part of an artwork, was an equally valid re-use and recycling of this lovely junk.  I miss that time, when a few old brass bolts, washers and nuts could become spacecraft, alien robots or the machines of a childhood imaginary world.

We don’t repair things anymore.  Instead, we throw away things that almost work, for want of a small replaceable item being renewed or renovated and a little bit of human ingenuity.  We think it’s all too complex and time consuming.  So much stuff we own today is made unrepairable.  It’s considered highly unfashionable to know how things work and how to make them work again.  You have to replace rather than restore. 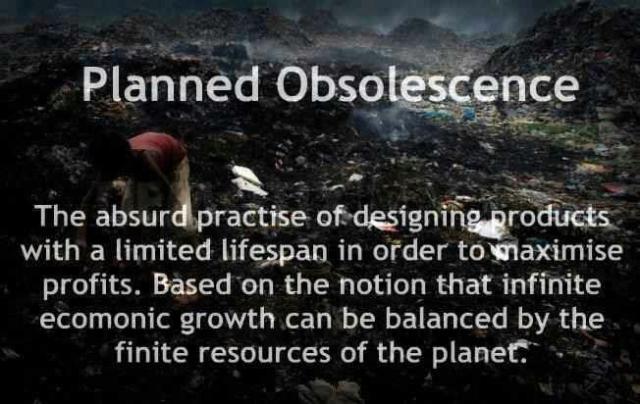 The phrase “beyond economic repair” is heard more and more frequently, applying even to objects as expensive and valuable as a car.  Today, the smallest dent can render your entire vehicle “beyond economic repair”.  That was unthinkable, when I was a young man.  Of course, this calculus excludes the true cost of disposal on the environment and the cost of any non-renewable energy that will be expended in manufacturing a replacement.  We don’t count the carbon footprint of taking the item away, grinding it up and then making and bringing you a new one.  The costs of cleaning up the toxins that leach into the water table are also not calculated.  All of those costs are “externalities”, borne by society at large, not the insurer that claims your dented car is a write off.  How does he escape them?  The insurer lives in the same society, whether he thinks so or not.  He will, too, bear these costs on way or another, even if he is a tax dodger engaged in tax avoidance.

Tax avoidance is a piece of improvisation that we could do without, quite frankly.  The one place I do not like to see creativity is in tax accounting.  It has been calculated that the entire national debt of this country could be covered by the tax avoiders paying what they ought to pay, by law, in taxes.  There would be money left over to invest in green technologies and in fine arts, too.  There would be no need for the sort of austerity that removes benefits from the disabled, preys on the long term unemployed and closes otherwise viable hospitals, because they aren’t economically viable.  Tax avoiders are the new scroungers, if you ask me – far more reprehensible than any benefits fraudster or dole bludger.  The tax avoiders all want the benefits of a society of well educated, healthy workers and consumers, who can make and buy their products by travelling via the roads, railways and internet infrastructures that taxes fund.  They just don’t want to contribute to any of it.

The arts?  No, those can’t be funded through sponsorship or government grants.  Despite record corporate profits, massive cash reserves and risibly low tax rates, these corporations all pretend that they’re feeling the austerity pinch, too.  They couldn’t possibly sponsor a season of ballet or an art prize.  They’re just as stretched, financially, as the rest of us, they claim.  No they’re not.

Another form of improvisation that I find fascinating is the so called “Steampunk” movement.  Here, artists make new things out of old junk, giving high technology products an aesthetic treatment that would seem to place them in a previous century.  The raw materials for this creativity are often old and obsolete mechanical objects.  Cogs and wheels are reused in the service of sheer decoration.

There’s a lot to be said for making art out of waste.  Spontaneous acts of creativity, improvised and expressed extemporaneously, are very cool, especially if we find new uses for the things that other people leave behind, Wombles style.

So improvise whenever you can.  The planet will thank you and humanity thanks you.

You can find out more about me here: https://michaeltopic.wordpress.com/. There aren’t many people that exist in that conjunction of art, design, science and engineering, but this is where I live. I am an artist, a musician, a designer, a creator, a scientist, a technologist, an innovator and an engineer and I have a genuine, deep passion for each field. Most importantly, I am able to see the connections and similarities between each field of intellectual endeavour and apply the lessons I learn in one discipline to my other disciplines. To me, they are all part of the same continuum of creativity. I write about what I know, through my blogs, in the hope that something I write will resonate with a reader and help them enjoy their own creative life more fully. I am, in summary, a highly creative individual, but with the ability to get things done efficiently. Not all of these skills are valued by the world at large, but I am who I am and this is me. The opinions stated here are my own and not necessarily the opinion or position of my employer.
View all posts by tropicaltheartist →
This entry was posted in Uncategorized and tagged Aesthetics, Arrangement, Art, Art from Waste, Artists, arts, Authenticity, Beauty, Creativity, Depression, Economics, Environment, Experiment, Humanity, Ideas, Imagination, Improvisation, Innovation, Integrity, Learning, Love, Money, Music, Musician, Musicians, Originality, Paint, Painters, Painting, Planned Obsolescence, Play, Quality, Recycling, Rejuvenation, Renewal, Renovation, Restoration, Reuse, Success, Technique, transportation. Bookmark the permalink.