Living In A Box

Posted on April 10, 2011 by tropicaltheartist

Once upon a time, recording studios were big places costing millions, with specially designed and treated audio rooms, massive recording consoles, exotic tape machines and a bunch of people sitting around for hours perfecting every note of the work they recorded.  At least that was how it was when recording was done in the late 1970s and early 1980s.  Those studios are disappearing.  Their passing is lamented by some, but not by me.  I think the justification for having such things is becoming slimmer by the year.

All of that recording technology and real estate was paid for by the record buying public.  These days, recordings are sold (and “borrowed”) mostly as digital downloads in MP3 format.  The prices of recordings have plummeted.  The cost of making them needs to as well.

I agree that when you have a band or a large ensemble, the acoustic space you record in can make a great performance happen.  I also agree that recording a band playing together, with isolation screens, is a good way to capture the vibe.  In those cases, a great studio is a good thing to have.  But there are so many other ways to make a record, that it begs the question whether or not the purpose-built recording studio is useful at all.  In some forms of production, the very size of the space can make it feel impersonal and intimidating, to the detriment of the music being created.

I’m a big fan of people like Jean Michel Jarre, Thomas Dolby, Les Paul and Tom Scholz, who made world class music in their own home-built recording and production spaces.  In each era, they solved their problems in their own ways, but I think today the opportunities to produce records of comparable quality to anything a professional can make in a big studio are many.  The gear is available.  The challenge is in learning how to use it.

These days, with Digital Audio Workstation software like Cubase 6, FL Studio 10, Logic 9, Pro Tools, Sonar X1 and a host (no pun intended) of others, the possible recording work flows and music production work flows that can be supported are amazing.  With the range of software instruments, software effects, guitar amp simulations, mixing and mastering tools available as add ons, plus the vast array of loops, MIDI files, sample libraries and construction kits on the market, you can produce literally any sort of music you desire within the computer.  This style of production, mixing and mastering is called “in the box” production.

I will concede that not everybody can buy a decent computer, some microphones, an audio interface, some decent headphones and a bunch of music production software and produce the next big hit.  There are problems to solve, not the least of which is learning to use the plethora of tools available to you effectively.  There are also some very practical problems to solve.  Let’s assume you know how to write and perform a song and that your problem is how to produce a record (writing and performing are fields of study all on their own).  Here are some of the problems you will face and how to solve them:

Getting the computer to work well – unfortunately, the designers of computers didn’t really care whether or not audio streaming was able to continue uninterrupted, so it is actually allowed to stop and re-buffer.  We’ve all heard the effect.  That doesn’t work for audio recording.  The audio stream is sacred.  The best you can do, at present, is buy a super powerful computer and hope to hell that none of the device drivers is greedy or inconsiderate.  Macs tend to behave better than PCs, in this respect.  However, it is a problem that can be solved well enough today and hopefully can be designed out altogether by future computer designers.

Getting a good recording of a vocal – I believe that this is the principle problem to solve, for most popular music.  Fortunately, there are lots of solutions.  In the first place, there are software tools like iZotope’s Nectar and Voxengo’s Voxformer that make the signal coming from the microphone as gorgeous as it can be.  Nectar, Cubase and FL Studio also have the means to correct the pitch of singers singing slightly off tune and Vocalign can fix timing errors.  You also need a decent microphone.  I recommend the Rode series, but the most exciting new product for me is the Audio Technica AT4080, which is a ribbon microphone that can make those fantastic vocal recordings reminiscent of the 1950s and 1960s.  You can get one for around £800. 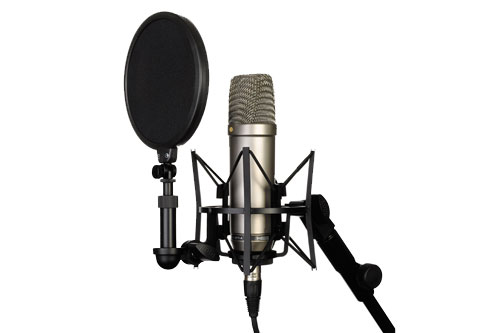 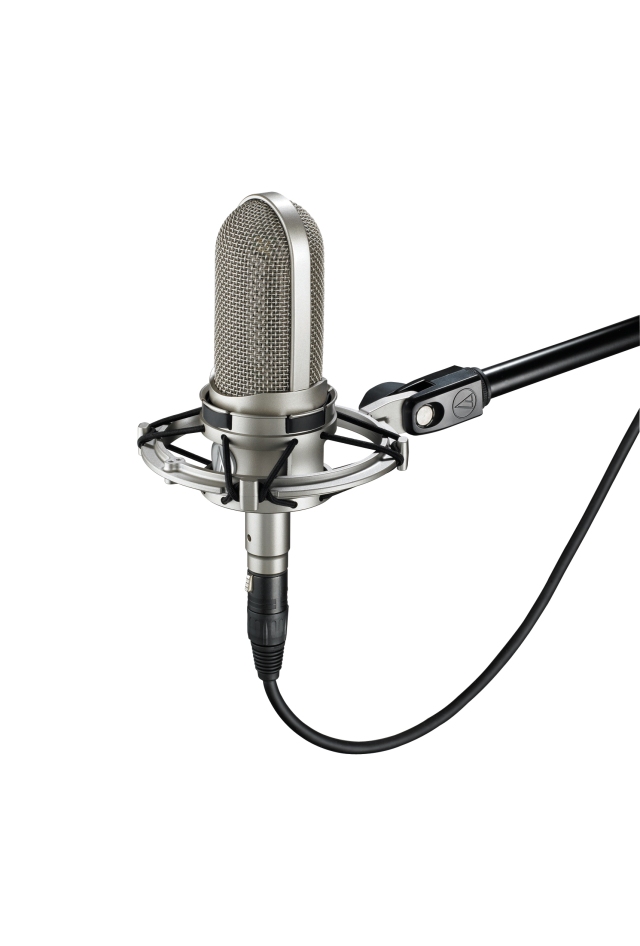 Acoustic isolation – There are problems with a highly sensitive microphone, if the room you are in does not shut out unwanted environmental sounds. Some solutions range from adding some thick bedding (duvets, for example) to some clothes rails (a technique described by Rode microphones in one of their many videos for home recorders), to using a localised Reflexion filter (which acts as a mini vocal booth surrounding the actual microphone (see the picture of the semi-circular shield around the mic below), to pre-fabricated sound booths (such as the self assemble studiobricks solution shown below). 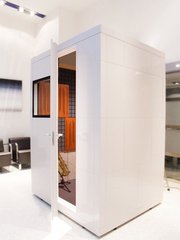 Plugging everybody in at once – Assuming you want to record more than a vocal at a time, you need to plug everybody in.  There are two pretty good solutions.  Firstly, a professional audio interface for your computer is a good investment.  Another slightly more outlandish solution to get the entire band playing at once is the JamHub, which lets every electric player plug in to the hub and monitor their own performance individually, through headphones, while feeding the computer each part for recording.  Remember that even the drummer can be an electric player today.  The important thing is for your computer to keep up. 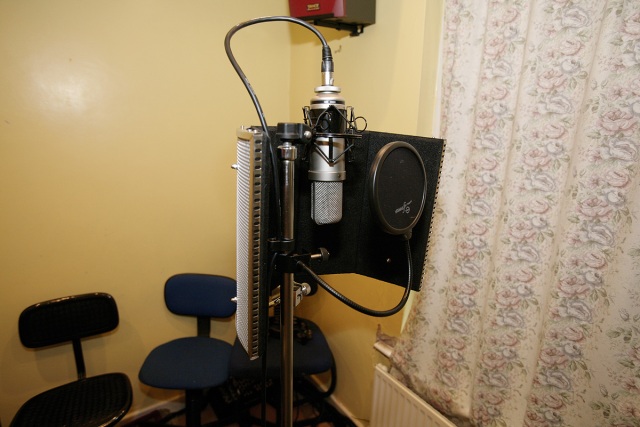 Recreating an acoustic space – one of the things that people miss most when they no longer record in dedicated recording studios is the sound of the studio itself.  Its reverberant characteristics were often very carefully designed to produce a lovely sound.  Well, fear not.  With the software plug ins available today, you can get convolution reverbs which can exactly match the room characteristics of spaces like the Sydney Opera House concert hall, for example. 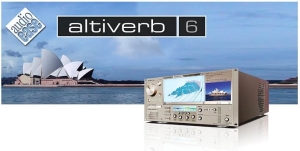 There is more flexibility in a programmable convolution reverb than there is in hunting for the perfect room to make a recording. 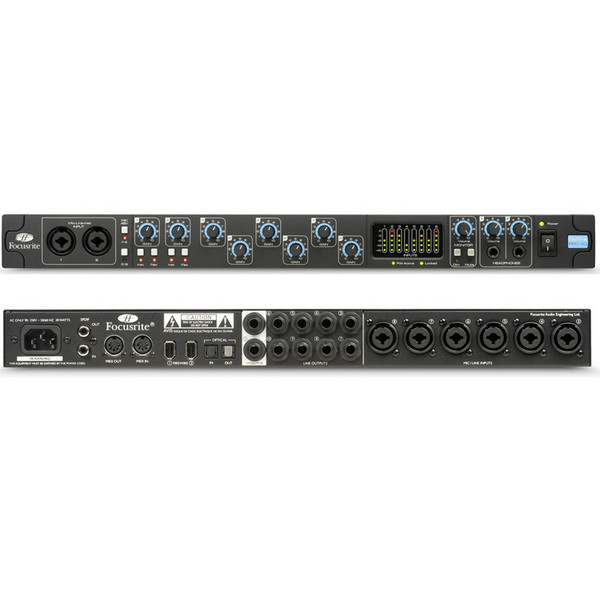 Monitoring – lots of people worry that the loss of dedicated recording studios means a loss of monitoring environments.  The danger with mixing and monitoring through studio reference monitors is that it was a big lie.  Most music was going to be heard via ear buds on the train, or through less than adequate home stereos, boom boxes or car radios.  Many people monitor in headphones, these days.  There are dangers with doing that as well.  To get around them, there is a software solution.  To make your headphones sound as if you are monitoring in an old style audio monitoring suite, there is Isone Pro, which for a few quid lets your headphones get carefully contrived cross-channel contamination, simulating what happens when you listen to speakers in a room.  Considering that the software emulation of the guitar amp you may have recorded with had a simulator that let you choose room characteristics, virtual mic placement and the size and shape of the virtual amp speaker cabinet, the monitoring environment was just a simple extension of that.

How about wild, outrageous acoustic feedback? – so by now, I hope it is obvious that once you have recorded something with microphones, or by direct injection of electric instruments, you can mix, process, master, acoustically simulate, effect and correct everything int he computer.  However, what do you do when you want to simulate that “through the air” feedback beloved of lead guitar players?  If there is no speaker and no physical amp, how do you get the guitar to feedback?  In my view, you could still use a real amp to do this, especially if you have a studiobrick booth or similar, but another way is a software emulator of the feedback.  The Soft Tube Acoustic Feedback module is just the ticket.

So my view is that you can do pretty much anything you used to need a studio for, in the box.  I am yet to encounter a situation where you cannot, but I remain open to the possibility.  What is clear to me is that the more that musicians and producers realise that you don’t need all the pomp, ceremony and expense that used to accompany the making of a major label record, the better the in the box solutions will become.

In the end, it’s all about the music you make.  How you make it is not of concern to the consumer.  Just make it good.  I don’t have all of the gear above, but I have some of it.  My music making journey is one of discovery and of solving problems other ways, when finances do not permit the ideal solution.  Some of the above pieces of equipment are in and of themselves quite expensive, but as is becoming more common in recording music with computers these days, reasonable compromises are available for much less money and sometimes even for free.

It’s an exciting time to be making music.  The tools have never been better or more accessible.  The creative possibilities have never been wider.  The biggest challenge is in learning to use everything, while preserving what you know about microphone placements, musical performance, nurturing musicians and their egos, writing songs and making an emotional impact on the listener.  I wouldn’t go back to the bad old days of studios being the preserve of multi-millionaires or powerful corporations for anything.  Now is the time to create like you have never created before.

You can find out more about me here: https://michaeltopic.wordpress.com/. There aren’t many people that exist in that conjunction of art, design, science and engineering, but this is where I live. I am an artist, a musician, a designer, a creator, a scientist, a technologist, an innovator and an engineer and I have a genuine, deep passion for each field. Most importantly, I am able to see the connections and similarities between each field of intellectual endeavour and apply the lessons I learn in one discipline to my other disciplines. To me, they are all part of the same continuum of creativity. I write about what I know, through my blogs, in the hope that something I write will resonate with a reader and help them enjoy their own creative life more fully. I am, in summary, a highly creative individual, but with the ability to get things done efficiently. Not all of these skills are valued by the world at large, but I am who I am and this is me. The opinions stated here are my own and not necessarily the opinion or position of my employer.
View all posts by tropicaltheartist →
This entry was posted in Uncategorized and tagged Acoustic Isolation, Acoustic Treatment, Altiverb, Amp Simulators, Audio Booth, Audio Ease, Audio Interface, Audio Technica, Condenser Microphones, Convolution Reverb, Cubase, FL Studio, Focusrite, Image Line, Isone Pro, iZotope Nectar, JamHub, Listening Room Simulation, Mastering, MIDI, Mixing, Monitoring, Music Production, Music recording, Record Companies, Recording Studios, Reflexion Filter, Ribbon Microphones, Rode, Sample Libraries, Soft Tube, Steinberg, Studiobricks, Toneboosters, Virtual Effects, Virtual Instruments, Voxengo Voxformer, VST. Bookmark the permalink.

3 Responses to Living In A Box